The Austin Chronicle promoted our Record Release Show and took some great photos of all the bands. They also wrote up a nice review of the record too.
“There’s a specific sweaty dejection to lunching alone in a car. On their first label release, local noise quartet Super Thief reaches frenetic mania over the subject, self-discontent dripping from Cody Kimbell’s strung-out verse. Channeling Eighties hardcore, “Gone Country” pulses with restless, writhing energy. Accounting for half the EP, 10-minute closer “You Play It Like a Joke …” rails against false repent for toxic behavior. Devolving into a bassline under spoken lyrics, even its punk minimalism is relentless.” 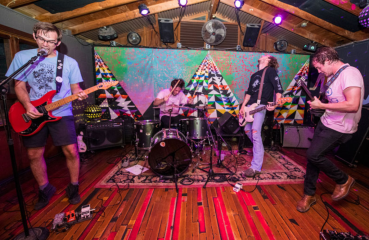 “The record is a wild and out of control shot of blistering noise rock infused punk that rages and burns with energy that’s missing in dozens of punk records these days.” – Karol Kamiński
https://idioteq.com/noise-punks-super-thief-go-mental-with-their-new-video-woodchipper/

New Noise Magazine streamed the full EP ahead of the release day.
“Riding like lightning and crashing like thunder on their recent EP Eating Along in My Car, Austin’s very own Super Thief give some much needed albeit beautiful cacophony to represent the times of 2018. Grooves and noise come together like a one-two punch for an EP that presents the over caffeinated chaos of Big Black and the jerky abrasiveness of early Melvins. Crank this one up loud because any other way to listen to it would be downright blasphemous.”
https://newnoisemagazine.com/stream-super-thief-eating-alone-car/

Decibel Magazine premiered the first single “six months blind.”
“Austin is best known in the musical community as the city where a bunch of industry insiders and bands hoping to be “big” convene once a year for a mutual lovefest. As a result, it’s often easy to forget that Austin is a hub of genuine musical weirdness and creativity, from singer-songwriters Daniel Johnston to Dax Riggs to hardcore originals MDC. Super Thief is another band that hopes to make Austin weird again with their brand of noise punk. Check out the new track “Six Months Blind” below and get your hands on their upcoming EP Eating Alone In My Car from Learning Curve Records.”

Gimme Tinnitus included us on their list new streams to check out. Other bands include Parquet Courts, Pile, Spray Paint, Protomartyr, Guerilla Toss and more!
https://gimmetinnitus.com/2018/08/stream-these-super-thief-savak-lai-rene-chambers-dyr-faser-peel-dream-magazine-guerilla-toss-pile-parquet-courts-kurt-vile-lithics-protomartyr-and-spray-paint/?utm_campaign=shareaholic&utm_medium=twitter&utm_source=socialnetwork

Noise Floor blog gave us a shout out too! Thanks, Alex!
https://noisefloor-alex.blogspot.com/2018/08/super-thief-eating-alone-in-my-car.html?spref=fb

First review of ‘eating alone in my car’ from Hex Records.
“After some buzz with several releases over the last couple years Austin’s Superthief returns with a new EP of bizarre noise rock goodness.  Think the serpentine bass of Jesus Lizard, snarky, snarled vocals a la Albini, and grating, knotty guitar work that lurks as well as it annihilates… It’s weird, pissed-off, and heavy and ya know, I guess I can relate…  I love the crazy tension, wild energy, and messy yet cohesive damage being created by this group. “
https://hanginghex.blogspot.com/2018/07/its-fuggin-hot-read-reviews-that-will.html?m=1

The Austin Chronicle wrote up a nice review of STUCK. An excerpt is below. Pick up a copy in Austin or check it out at the link to read the full thing…

“On their third release in as many years, Austin’s young noise punk quartet has crafted its best work by converting the mundane into inspiration. Over punishing start-stop rhythms and guitars exhaling distortion – recalling Jesus Lizard circa 1990 and the Refused circa 1996 – Super Thief’s losing streak of boredom, self-doubt, and rat-race nihilism fuels powerful missives touching on artistic indignity, traffic on I-35, and paranoia.” – Kevin Curtin
https://www.austinchronicle.com/music/2017-08-11/super-thief-stuck/

Reviler.org wrote up a nice blurb promoting our show in Minneapolis and took some great pictures too.

Not for the Massess… included “i don’t know about you or your band,” on their best of June 2017 list calling it, “heavy noise rock that is somewhere between Spray Paint and Slayer.”
https://thefirenote.com/2017/07/12/not-for-the-massesbest-of-june-2017-playlist/

Got also some love from the Terrible Tuesday Radio Show w/ DJ Naked Rob and The Local Scene show done by Wrong Side of Texas Records.

Reviews of the new record thanks to PunkRockTheory.com and IDIOTEQ.com

Post-Trash and New Noise Magazine premiered two singles off our full-length album STUCK due out on June 9, 2017.

“Books w/ No Pages” bursts to life like an unholy awakening, the pulse like a stampede that runs over you, pauses momentarily, then tramples you several more times. Students of the AmRep/Touch & Go school for noise rock, Super Thief draw comparisons to bands like The Jesus Lizard, Hammerhead, and Tar, but their attack is more impenetrable, more persistent. There’s no lull, no restraint. When the band pull back ever so slightly from the carnage, it’s only to hammer in the reality of their earthquaking rhythms and rusted distortion. The gnarled and contorted “Books w/ No Pages” may not cure your headache, but you won’t soon forget the band’s volatile punk density… or where the drugs are.”
– Dan Golding (Post-Trash, Exploding in Sound)

KFUEL (France) and Kool Strings (Belgium) featured one of the new songs “i don’t know about you or your band” on their shows [1:39:30, 34:35] and Damnably featured “Taste U” off the DILLO MILK 2 compilation [53:45] along with other Austin, TX friends Xetas, Carl Sagan’s Skate Shoes, and more…

The Austin Chronicle put up some photos from FREE WEEK including some from our show. Thanks to David Brendan Hall Photography.

Reviler.org included us in their favorite shots of 2016! More great photos to be seen including shots of Iggy Pop, The Blind Shake, NOTS, The Hussy, and more. Click the link.

DO512 included us on their list of “Local Bands You Should Be Listening To.”
http://do512.com/p/local-bands-you-should-be-listening-to-volume-13

A few of our songs were featured on radio shows outside of the U.S.

Kunstgebit (live web stream show out of Amsterdam)
the dump sink ep is the last feature on the show around the 1:45:00 mark

Reviler.org wrote up a review for dump sink and plugged our show in Minneapolis, MN. They also put up some pictures from the show.

We did an interview with Winnipeg Free Press about coming up to Canada for Big Fun Fest.
http://www.winnipegfreepress.com/arts-and-life/entertainment/music/big-fun-comes-in-small-package-366210211.html

The Deli Austin wrote up a review for dump sink.
“Super Thief is obviously hitting a hell of a stride here… They’re seriously getting franticness right, using their distorted, whining guitars with Super Thief’s signature crunch sound, their screaming vocals and devastating speed in a tight-as-fuck structure for music that simply doesn’t let up. With the release of dump sink and their album from last year, Super Thief isn’t just a very interesting noisy local hardcore band anymore; they’re maybe the most interesting noisy band I’ve heard period in a long time.”
http://austin.thedelimagazine.com/23747/super-thiefs-dump-sink-ep-makes-them-most-interesting-noisy-band-austin-and-maybe-anywhere

Musically Fresh put up a review of our self-titled EP. Check it out.
http://musicallyfresh.com/2015/08/super-thief-super-thief-ep-review/

The Deli Austin wrote up a very kind review of our self-titled EP. Check out the full review HERE.

Brian Audette wrote up a review of our self-titled EP. He talks about our new, heavier sound and plugs our cassette release show at Beerland on 1/28. Read the full review here.

Ovrld also put up some photos from Free Week show including some snaps of us playing The Mohawk w/ Hundred Visions, Xetas, Hola Beach, and Pollen. More pictures can be found HERE.

Here is an article that talks a little about the local punk scene and plugs our show at Beerland in Austin on Friday, Sept. 5th with Carl Sagan’s Skate Shoes and Basketball Shorts. Ashley Bradley also snapped some photos from the show.

Ovrld put up an article covering our show w/ Odonis Odonis and Shockwave Riderz at the Mohawk. They snapped some great pictures too. Check out the full article and the rest of the pictures here.

Austin Monthly reviewed our first set of demos. Check out all the reviews here.

CMJ did a write up covering our show at The Mohawk opening for Swearin‘ w/ The Midgetmen. Read the whole thing and check out photos of the show here.

One thought on “Press”